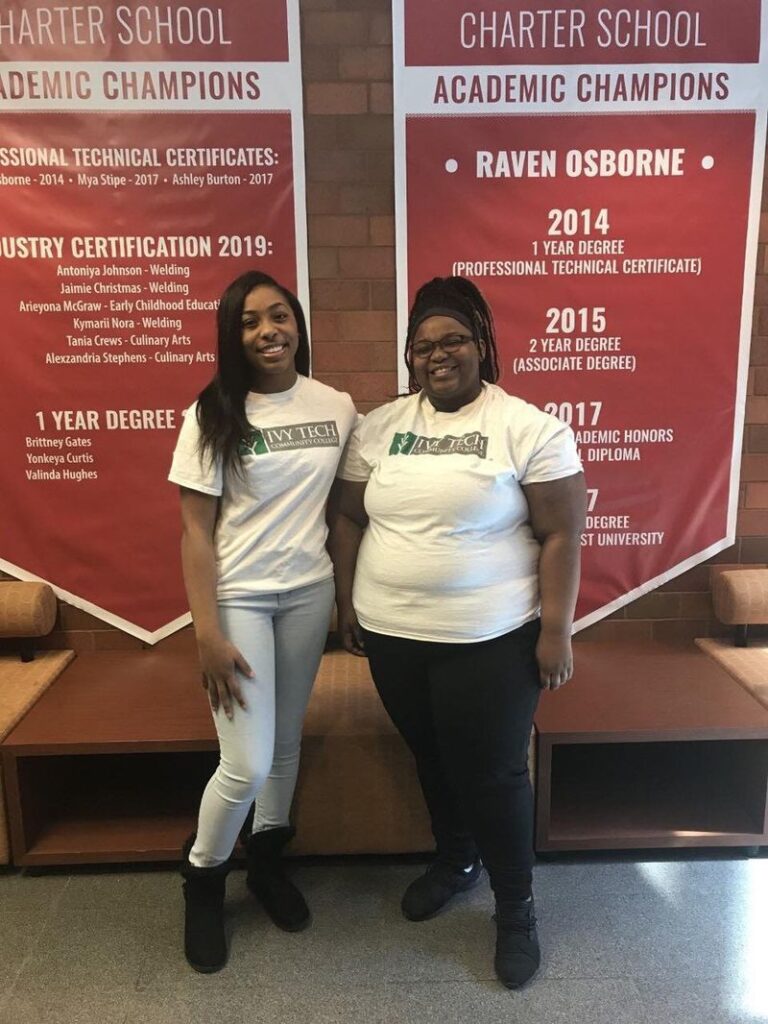 The school has many students who are currently in a college program at different grade levels, as early as 9th grade. Either they have already earned their associate degree, or they will earn it before graduating.

“We have one student on track to earn her bachelor’s degree this summer,” said Murphy, who also serves as director of college and career programming. 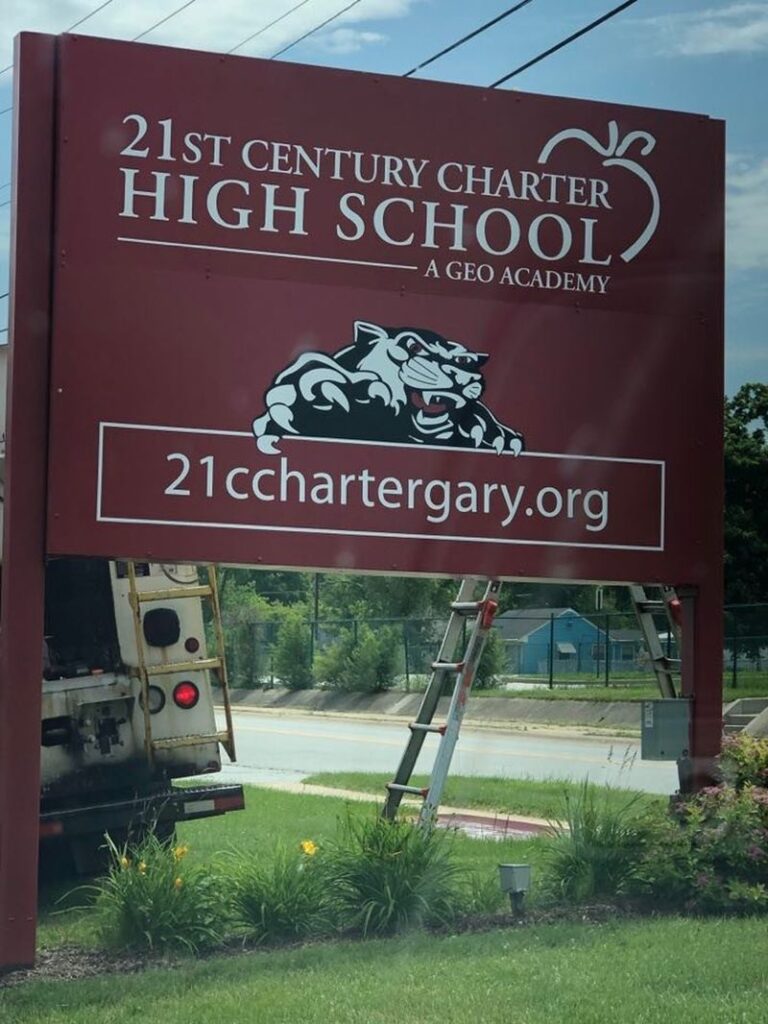 Mayes, 17, of Gary, is considered one of the school’s “star seniors.”

“I’ve had experience with other public schools in Gary. I was not a fan of it at all,” she told me. “This school has guided me into my career, steadily and easily. The courses and options I was given was endless and this opportunity was amazing.”

Mayes plans on attending a four-year university to complete her degree.

“And then go on to help people who are less fortunate than me, one step at a time,” she said.

She’s only 17. At that age, I was focusing on what to have for lunch every day.

“When I attended school here, only one student had received a college degree through our program. That number is now more than 30 students,” said Nyesha Barnes, 24, a former student who’s now an algebra teacher there. “Our dual credit program has grown tremendously.”

If you think this is common — students earning college degrees in high school — it isn’t.

The state average for students earning college and career credits while in high school is 68%. It’s lower for Black students, 49%, and for low-income students, 57%. This school year, the 21st Century Charter High School scored an 88.9%, with 80% of its 2021 senior class expected to earn at least a career certification or one to two years of college before graduating.

“Poverty is a real challenge and it gets even more challenging when you are facing a pandemic. But our kids are showing some real resilience and focus. They’re succeeding against all odds,” said Kevin Teasley, founder and president of GEO Foundation in Indianapolis, which operates the school.

“We are a public school with open enrollment. We can’t pick and choose our kids,” he said.

When I first visited the Gary school in 2016, I came away a believer in its program. Since then, GEO Foundation has requested the state legislature to update the definition of an “academic honors” high school diploma, to include the Indiana College Core. The state last updated this definition in 2012. It’s time to do it again, by including the ICC, a group of 30 college credits fully transferable to any college in Indiana. 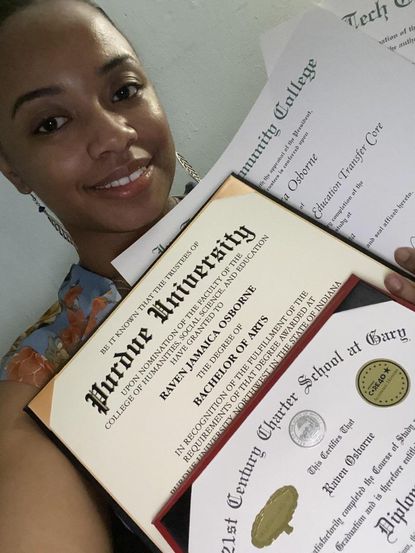 For example, in 2012 the definition gave formal credit to students who earned six college credits in high school. This year, 18 of the Gary school’s 59 graduates earned 30 college credits or more, but only two of those students will earn academic honors. This doesn’t seem fair to me.

“We have four students who earned full associate degrees, including one student, Erin Lewis, who earned 111 college credits from Purdue Northwest, but they won’t get the academic honors designation,” Teasley said. “These students are in rare air in Indiana.”

According to the Indiana Department of Education website, less than 20% of Black students and 23% of low-income students earn academic honors diplomas.

Indiana has outlined a goal of having more students earn high-quality career certifications or college degrees by 2025. Updating the definition of academic honors would provide students an additional incentive to earn these credits.

Chicha Sanders transferred her daughter, Laila, from a Porter County charter school to the 21st Century school when she was in eighth grade. She’s now a sophomore.

“I transferred her specifically for the purpose of being able to earn college credits, take dual credit classes, and to be at a school where she felt welcomed for being who she is, a really smart, creative girl,” Sanders said.

Laila is academically ranked first out of 93 sophomores with 31 college credits, a 4.1 grade-point average, and acceptance into the National Honor Society and Gary Youth Council. She also is a peer helper in her virtual classes and has her own business on Etsy.

“I think she may be able to graduate early,” her mother said. “And she is only a 10th grader.”

For comparison sake, 48% of the state’s adult population has a career certification or a two-year college degree, according to state figures. 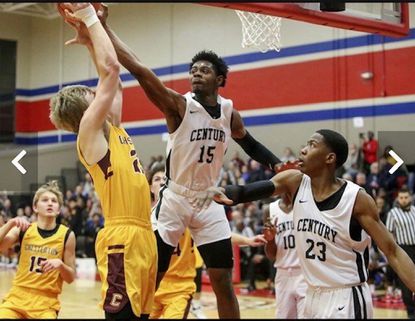 Erin Lewis earned her associate degree from Ivy Tech when she was a high school sophomore. She is now also attending Purdue Northwest to study bio chemistry.

“21st Century has guided my career plan by simply providing the means for me to shorten my schooling time,” said Lewis, 17, of Merrillville.

Since sixth grade, Lewis knew her career path, with the long-term goal of working in a research laboratory to study genetic mutations and their pathology. Her biggest concern was the education requirements to get there.

“I have been able to decrease the number of years to spend in college after high school by roughly four years,” she said. “This program sets me up to graduate from college and start my career at least four years earlier than my peers, with little to no debt.”

Students such as Lewis, Mayes and Sanders, along with countless other high achievers across the state, fit the very definition of role model students. They deserve the updated definition of “academic honors.” In a follow-up column, I will share the views of state officials who should make it happen.

[Most read] Some people are reporting abnormal periods after a COVID-19 vaccine. U. of I. professor is looking for answers. »

GEO Is Changing the Education Landscape…Literally!
They Did It Again!